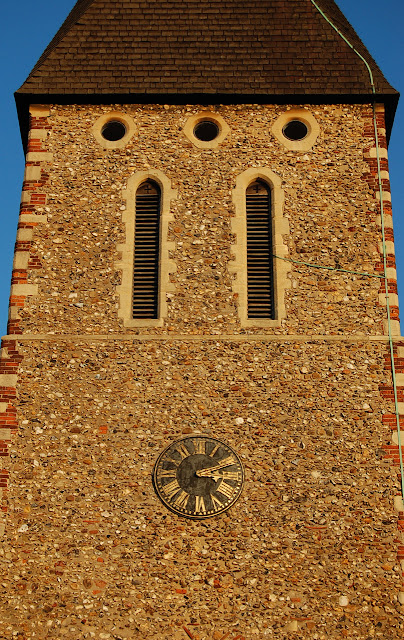 Sarcen stones in Essex? Well they're not common, but they do exist. Sarcens are boulders of very hard sandstone which originally formed in a rocky crust, broken up and redistributed by the last ice age. A modest deposit of sarcens have ended up in the gravel layer underneath the Essex clay, sometimes found during gravel extraction or exposed in the beds of rivers which run sufficiently deep, but they aren't very abundant. They were much appreciated by our ancestors, as their durability made them ideal for foundations, wayside markers and protective barriers at roadsides. They were also often taken for ceremonial use, the classic examples being the very large sarcen stones at Avebury and other sacred sites around Wiltshire. In Essex they are much less common, the soil being mostly clay and having no natural local stone other than the ever-abundant small flints. Consequently there are no significant megalithic sites in Essex at all.

So I'm very curious about the presence of a sarcen embedded against the wall of St Michael's church in Braintree. I first noticed it around 1984 and it's been intriguing me ever since.

St Michael's dates in part to the 12th century, although much of it was rebuilt from 1349 onwards, and ravaged in the 1860s by Victorian "restoration" zealots. One of the surviving 12th century components is the tower (above), which is largely constructed of brick, flint pebbles and bits of puddingstone and recycled Roman brick. There's quite a lot of Roman debris in the older parts of the church, which was probably fairly abundant at the time in readily available waste material, whilst the parts of the church which were added in later centuries are built from just flint and brick. There are some limestone blocks serving as quoins and window edges, but it has been used very sparingly. Many, if not most, old churches in Essex are built from similar flint, brick and rubble mixtures in the absence of any local stone. 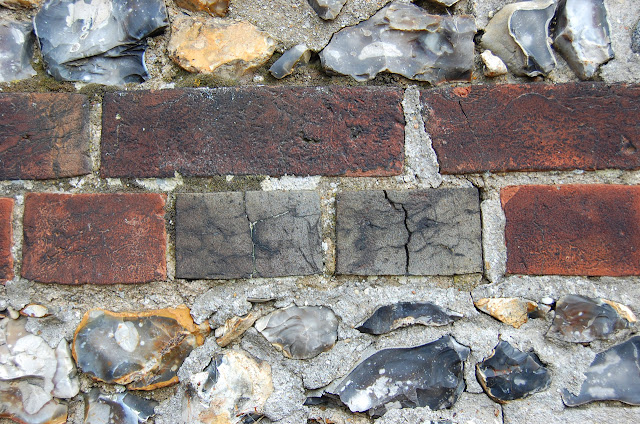 It's therefore quite interesting that there is a sarcen, or what appears to be a sarcen, wedged against the western end of the church just below the tower. It's hard to tell how big it is because it's embedded in the ground and has been tarmacked all around. Recently some gravel boards have gone up around it which make it look slightly smaller than it is. But roughly speaking, the visible part of it is about two feet wide and the top is fairly flat, though whether from deliberate shaping or natural weathering I'm not sure. It's not a huge stone and it's not very exciting looking, but it's pretty unusual as far as North Essex is concerned.

I've already mentioned that sarcen stones were used in times past for foundations of buildings, so that might account for its presence here. But this one is not part of the church's foundations – it actually sits right next to the foundations without being a part of them, which seems a bit odd. It looks more as if the church has been built around it. If that's the case then it must have been there for at least 850 years. 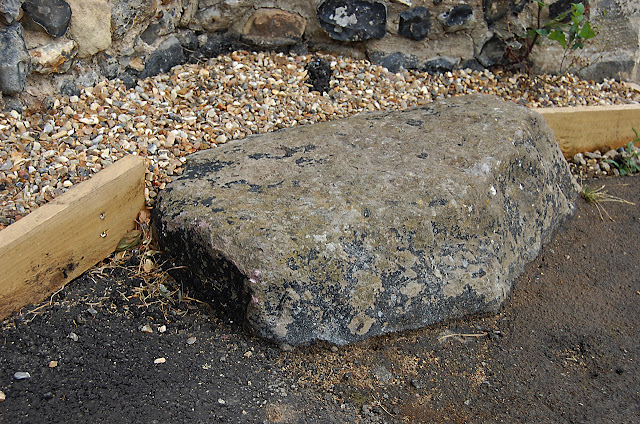 Which leads on to the question of what was on the site of St Michael's prior to the church being built there. According to Rodwell et al (1977) it is thought to have been the nucleus of an earlier settlement and there is a fair possibility that there was a Roman cemetery on the site. Many Roman fragments have been found in the churchyard, some of which are now in Colchester museum, and a rare Roman silver coin was found in the 1830s. Iron Age relics have been found nearby too. So was the stone placed there as part of the Roman activity or does it go back even further to an Iron Age settlement? I don't know if there's any evidence to suggest a previous ceremonial use for the site, but looking on the more speculative side, it may not be a coincidence that the church is built on the crest of a mound and the dedication to St Michael the Archangel is often associated with sacred sites of pre-Christian provenance. The fiery guardian archangel was thought to be a protective influence against any lingering pagan resonance on the site (although it didn't work very well on Glastonbury Tor). My own psychic radar finds the church to be flat as a pancake spiritually, so maybe Michael has been a bit over-zealous with the cosmic Domestos.

None of this would excite a huge amount of curiosity, except that I don't think this is the only sarcen stone in Braintree. There are, or were, at least a couple of others that I know of.

Other stuff in the churchyard - When I was growing up in Braintree in the 1970s there was a small, upright stone in the south-east part of the churchyard, by the junction of two pathways. It was only a foot or two tall and the top was hollowed out into something resembling a stoup, which was usually filled with rainwater. It disappeared some time in the early 1980s, though it's possible it may have been taken into the church for safekeeping, as I understand they do have a few stone relics in there which include one described as a stoup.

Sandpit Lane/George Yard sarcen - I vividly remember a sarcen stone very, very similar to the St Michael's one, embedded at the roadside in George Yard. The original George Yard was a narrow and ancient lane leading off the east side of Sandpit Lane. It had no pavement on its north side and there was a slight kink in the road as it narrowed towards the far end. The cause of this kink was a large flat sarcen boulder, almost identical in size and shape to the one at St Michael's, sitting at the edge of the road and sticking out into it. Clearly the course of the road had been adjusted to fit, and even the double yellow lines did a slalom around it.

It's not unusual to find sarcen stones in roadside positions like this; in fact it's one of the most common uses for them. It was no doubt placed there to protect the masonry of whatever stood there in former times (I don't think there were any old buildings there during my lifetime, but the 1876 map shows what was probably the perimeter wall of a Methodist chapel ground) to prevent any damage from the wheels of passing carts and carriages. The question in my mind though is whether a fresh sarcen was brought in for this purpose or whether it was an older stone "recycled" from an existing Braintree site, perhaps in the vicinity of St Michael's. Sadly it's not possible to compare the stones any more because the entire lane, sarcen and all, were swept away and destroyed in the George Yard shopping precinct development of the 1980s. Even the original line of the lane (and position of the stone) is impossible to discern any more in this depressingly bland and homogenised retail blight.

Boar's Head sarcen? - In 1985 I had a friend who worked as a general labourer for Braintree District Council. One day he told me that he and a couple of colleagues had been brought in to do some work on a disused well in the car park of the Boar's Head pub in the High Street. The Boar's Head is a very old pub – parts of it date back to the 15th century – just across the road from St Michael's church. Down at the very bottom of this dried out well was a sarcen stone, which appeared at some time to have been thrown down there. I never got a chance to see this stone for myself or even verify its existence, but my friend reckoned it was very similar to the one in the churchyard. Again, one assumes that it had been moved from its original site, wherever that may have been. 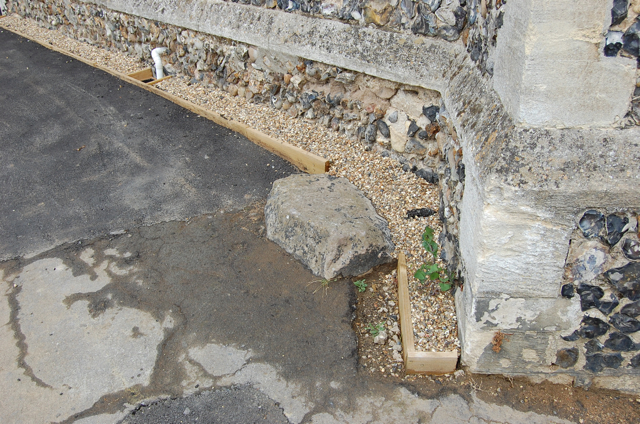 Are there other Braintree sarcens? I've no idea. The rate of redevelopment in Braintree is so fast that even during my own lifetime some have been lost ... so there may well have been others which were lost in earlier years, or which still survive in places I haven't seen. I don't have any theory as to what they might have been used for if there were more of them. A stone circle is unlikely, but some other pre-Christian ritual setting is possible. Perhaps they were monuments in the Roman cemetery. Or markers along the Roman road.

As uncommon as sarcen stones or other prehistoric stone monuments are in Essex, there is some similarity here with a scattered group of sarcens in the churchyard at Alphamstone, a village a few miles to the north. There is common ground in that the Alphamstone sarcens appear to pre-date the church, which looks to be built around them, and some have been moved from their original sites, perhaps to use for other purposes.
Posted by Rebsie Fairholm at 10:36 PM