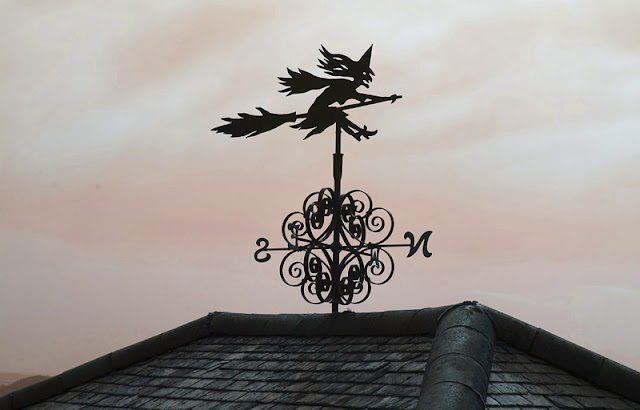 Topical weathervane on the bus shelter at the Wyche Cutting, Malvern.

The Wyche is a notch or cleft on the crown of the Malvern Hills, straddling the border between Worcestershire and Herefordshire. It can be seen from miles away as a cleft in the long line of undulations and it marks an important crossing point. It's one of only two places where you can drive over the top of the Malverns rather than having to go all the way round the perimeter, although it is steep and bendy and something of a white knuckle ride in an ancient 1.0 litre VW Polo.

The pass over the hills as it appears today owes a fair bit to the Victorian road-improvers, and some of the tumps and bumps are the remains of spoil heaps from their digging endeavours. But the Wyche pass is ancient – known to have been in use in prehistoric times and to have formed part of a neolithic trade route, used amongst other things for the transportation of salt from Droitwich to South Wales. A small village occupies the high ground on either side of the hill, and a village green bounded by the intriguingly named Fossil Bank. 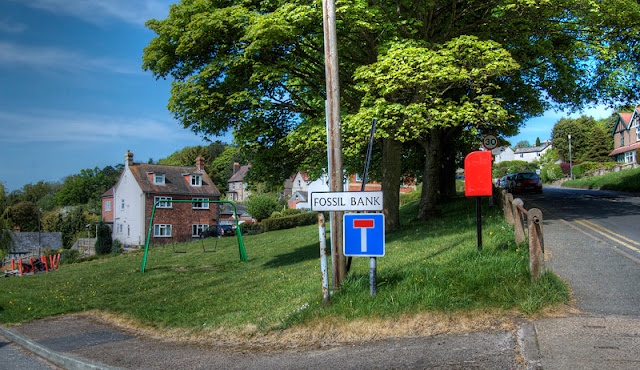 A special feature of the Malvern hills is the proliferation of roadside springs, spouts and wells – some drinkable, some dry – some sacred, some rancid. The Wyche Cutting has several, bringing together the symbolism of a cleft in the hills with a water-bearing cleft in the earth. They come in a variety of forms but are often at their most interesting on 1st May, when they are "dressed" with flowers and flags as part of a revival tradition.

The Wyche Spring (below) bears the distinction, apparently, of being the highest well on the Malvern ridge – a moot point really, as the flow has been shut off for some twenty years, possibly amid concerns of pollution. The spout is totally dry and in this Beltane well-dressing a twist of blue cellophane has been used to recreate the tumbling waters. The spring that feeds (or used to feed) this roadside water spout rises beside a cottage at the edge of the Wyche Cutting and reaches it through a pipe under the road. Unlike most of the springs and wells on the Malverns, which consist of rainwater squeezed through geological faults, the Wyche Spring is from a true underground watercourse, an Archaean spring. 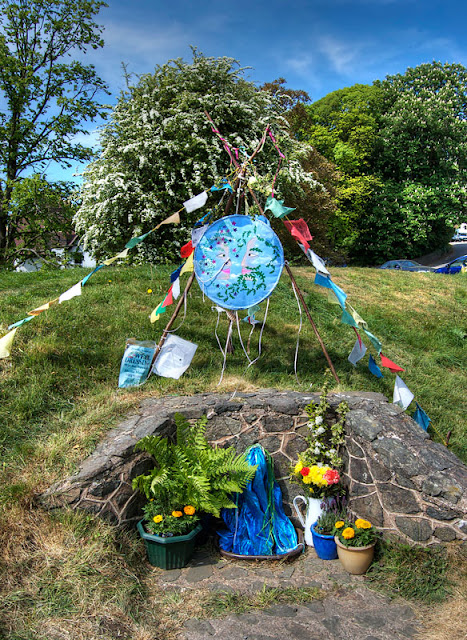 Here be the Willow Spring (below), only a few yards down the road on the other side, with its May Day dressing. The well doesn't look very much but it's one of the genuinely ancient Malvern springs. The water originally poured straight out of a cleft in the rock beside a willow tree, a proper sacred spring of the kind that opens into the underworld, for those that know how to look. The water was once fast-flowing, so much so that it was something of a hazard in winter, when the gushing abundance flowed over the road and froze into a sheet of solid ice – which is no joke on this stretch of road with its steep slope. An engraving of 1855 shows a very rustic scene with a willow tree growing out over the road at an angle and the waters pouring from the top of a boulder at the roadside. Although still rural, the scene is quite different today. For one thing, the flow is reduced to a piddly little dribble, enough to cultivate a small crop of moss but not much use for anything else. 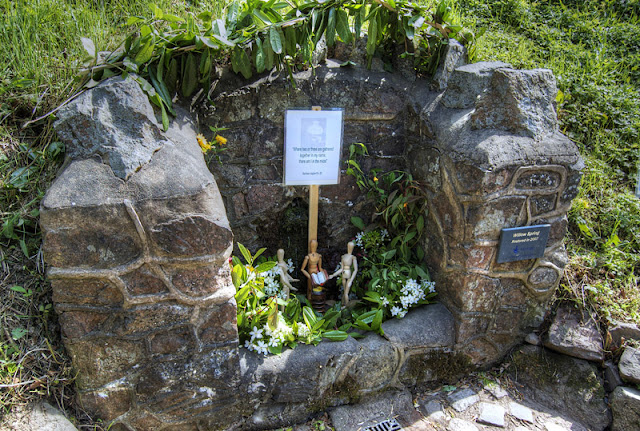 This is because the spring was damaged during WW2 by a bomb which landed close to it, and has not flowed properly since. Malvern springs are extremely sensitive to disturbance and it's not unusual for them to stop flowing properly if the ground around them is interfered with. The waters pass through layers of impervious pre-Cambrian rock whose alignments are very precise. The springs consist of rainwater which soaks into the hills and is filtered through minutely fine fissures in the rock, so tightly pressed together that even minerals and bacteria are unable to pass through the gaps, resulting in a water which is incredibly pure and essentially has nothing in it. It's a very delicate balance and if the rocks take a thumping the fissures can become so tight the waters can't get through them any more.

The Willow Spring was reconstructed in 1946 following the bomb damage, and set into a little stone enclosure. Its pootling trickle falls into a stone basin and into the earth through a simple soakaway under the ground. Because of this lack of proper drainage, it was decided during recent restoration not to undertake further work to improve the flow of the spring, for fear of causing icy overflow on the winter road. And so a dribble it remains. The willow tree is gone. So is the magic. Whether it's because of the bomb damage or whether it's just me, I can't sense any of the inner dynamics I would normally expect to find at a sacred well of such provenance.

Down below the road on the steep slope of the hillside is a place where the real magic flows. You won't find it named or signposted, but you might find it if you follow the sound of chuckling water. 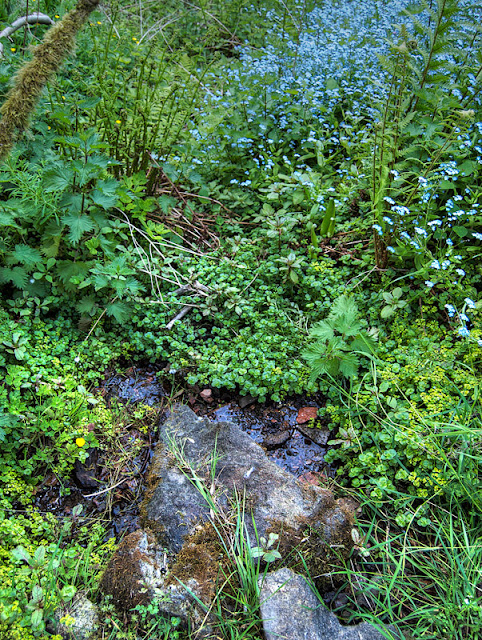 A small stream emerges from a mossy spout in the side of the hill and splashes into the pebble-gulley it's traced out for itself. The spout is most likely the outflow from the abandoned spring which formerly served the Royal Malvern Well Spa, long vanished, crumbled under ivy, its presence deleted. The flow from this spring is much greater than that of the two roadside wells round the corner, but its opening is hidden. It lies to the side of a footpath below the road and in its lushness it can only be found by listening to the tumbling of its water through the stones and weeds. Nobody "dresses" this spring at Beltane, but it dresses itself in the colours of the wild weeds and garden escapes. A radiant sky-blue trickles down its far side from a clump of forget-me-nots, a domestic cultivar gone feral and rejoicing in the marshy soil, fronded with fern and eyes of herb robert, green nettles and dusky watermint, tangles of buttercups and golden saxifrage. In the wooded shade of the footpath another garden escape, tissue-fine Iceland poppies, catch the shafts of the sun in translucent crêpe, a flaming orange. 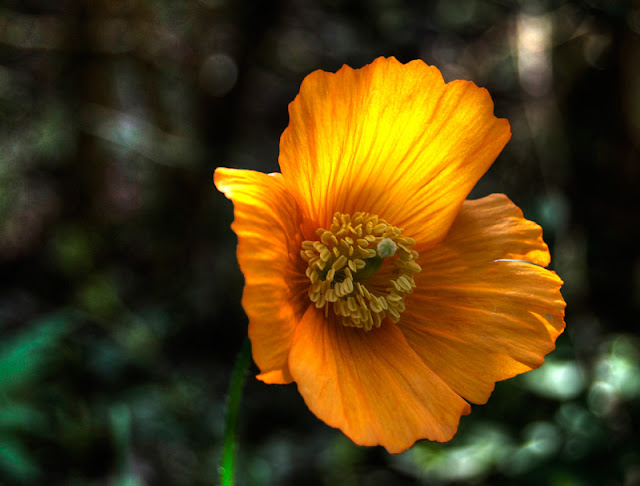 As the spring makes its way down the hill so the footpath follows in parallel, down a dappled corridor to a wooden stile where the bluebell woods meet an open green, giving way to a break in the trees where blue takes over. In the wood shade it's the royal earth blue, the saturated colour of pendular bells, and in the sunlit grass it's an astral faery light, radiant blue on a green wave. 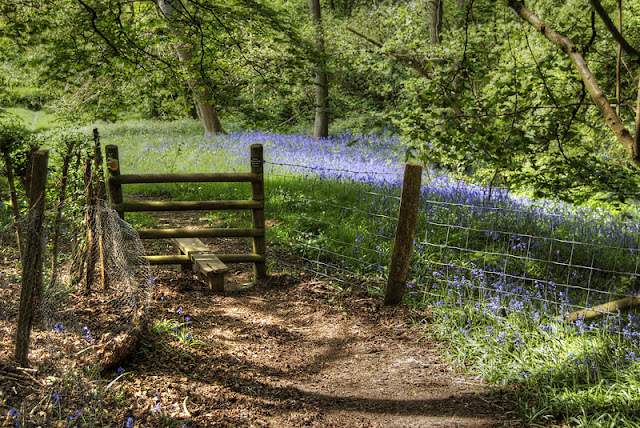 And so the path opens out into a meadow, where a solitary oak tree roots into the ancestral pitch and ancient memories flame the grass. 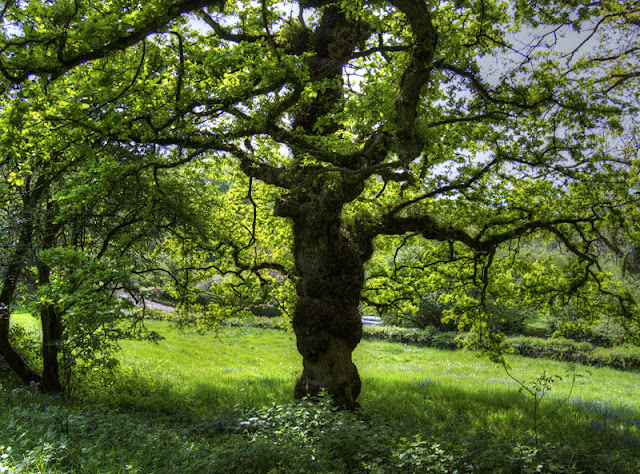 The Wyche oak, hub of the meadow.

Sources:
Aquae Malvernensis: The Springs and Fountains of the Malvern Hills by Cora Weaver and Bruce Osborne (private publication, 1994)
The website of the Malvern Spa Association
Posted by Rebsie Fairholm at 11:56 PM