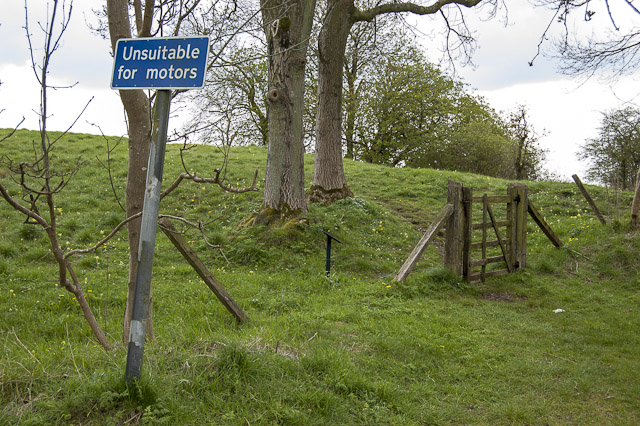 Most people visiting Notgrove long barrow these days have one overriding reaction: disappointment. "A lumpy mess" is one reasonable response. "Fucked" is another. But I would suggest that your appreciation of this barrow might depend on whether you believe in faeries. Or how much you appreciate wildflower biodiversity. Either of those perspectives will allow you to see something beyond the sorry sagging remains of this once impressive site.

I remember being "disappointed" when I first saw Notgrove long barrow in the late 1980s. To all outward appearances, it's an undulating wobble of indeterminate lumps and bumps, bereft of distinguishing features. Graceless and scraggy, it isn't even obvious which way round it is - nor where the barrow ends and the natural lumpiness of the landscape begins. Its position on the elevated plateau of the Cotswolds is quite spectacular, but unflattered by being crammed into a tightly cropped corner of a field, enclosed by trees and severely sliced round on all edges by fencing, so you can't stand far enough away from it to view it in its entirety. Being right next to the A436, access is easy enough with plentiful parking in a large, dirty, pothole-pocked layby, but you have to watch you don't get your arse knocked off while walking the few yards along the grass verge to the barrow, such is the speed of the cars tanking through this rural idyll. 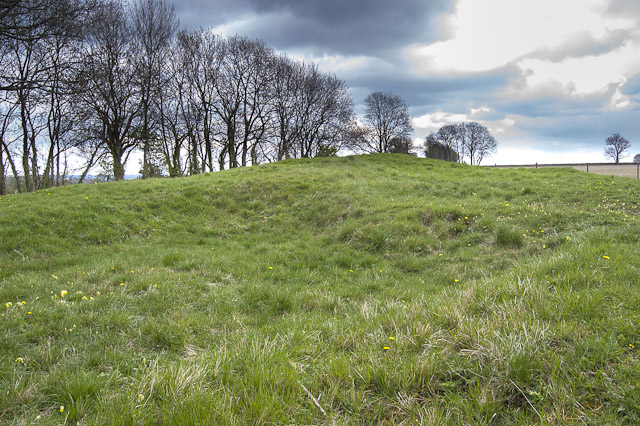 I'd like to be able to say that this indentation is the horned forecourt, but no – it's the other end. Merely a scar from the bad old days of invasive and irresponsible archaeology.

So much for the outer impressions, but Notgrove barrow still has a very nice atmosphere. As a site which was once made sacred, it retains its gravitas. As a place where a seeker of ancient resonances can connect with the ancestral magnetism within the mound, it retains its power. There are many archaeological perspectives on this barrow which can be found across the internet, but I'm more concerned with attuning to what the barrow offers on an inner level which might not be apparent in physical dimensions.

Long barrows of the Cotswolds and elsewhere have a long association with Faery, there being a deeply embedded tradition that hollow mounds are where the faeries hang out. In this region it seems to apply whether the mound be a man-made barrow or a natural conical hill of some kind. Most hills and mounds across Gloucestershire have some kind of faery legend associated with them, even if it's only the tales collected by Victorian mythographers from local farmworkers who encountered mysterious music or lights while wobbling home from the pub on a dark night. The tradition has its roots in Celtic legends of the Sidhe, who lived in the "hollow hills" and were often associated with burial mounds; these early portrayals of the "shining ones" are much closer to the root and spark of Faery than the more modern gauzy-winged notions. I'd say Notgrove barrow makes a pretty decent faery mound even today, and if you can find an entrance on the inner (there are many, find one which opens for you), it's a warm and friendly one too. 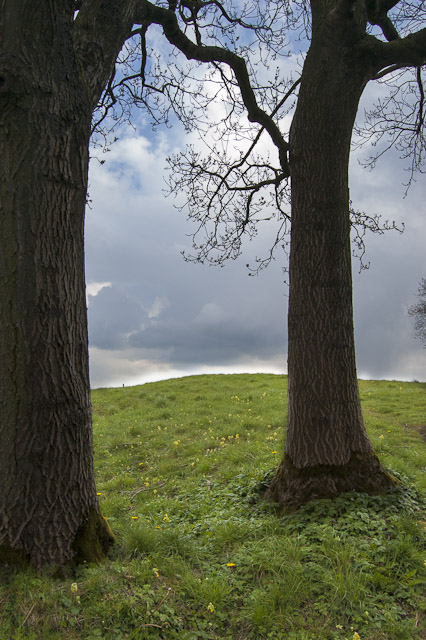 A local legend associated with Notgrove long barrow is that a golden coffin was buried within it (a very common claim which applies to many other barrows too). Not surprisingly, the two recorded excavations in 1881 and 1934 didn't turn up anything of that nature. And although the barrow had been plundered multiple times prior to that, if there ever was a golden coffin it wouldn't have been a physical one. It might be the mortuary receptacle of choice for the likes of King Tut and Jimmy Savile but the Neolithic people didn't really go in for coffins, other than simple stone cists, and certainly didn't make them from precious metals – a gold coffin actually sounds much more like a faery myth. The ubiquity of the legend at different sites suggests a lingering folk memory of an old myth associated with barrows and hollow hills. Common misconceptions about physical treasure in burial mounds were responsible for much of the lamentable destruction of ancient sites, during the 18th century in particular, and the Cotswolds are littered with half-dismembered barrows torn apart by get-rich-quick treasure-hunters and abandoned in disappointment when they failed to yield anything more than a jumble of bones and a few stone beads.

Indeed the idea that digging into a barrow will reveal, Tutankhamun-like, a glittering hoard of bling is quite a strange one as it doesn't seem to have any basis in reality. While some fancy burials with rich grave goods do exist in England, they tend to be from later periods – the Anglo-Saxons being the masters of this in their burial of an entire ship at Sutton Hoo. But whatever the long barrows were used for, there was more to it than a mere disposal of the dead. For the most part they were not built for a single interment of one important person but chaotic multiple burial. Many of the Cotswold barrows – Notgrove included – are found to contain a jumbled assortment of skeletons. While some of this might be put down to earth movement, burrowing animals, careless looters etc, that doesn't account for all of it, and it seems to have been the way these barrow-people did things. Either they let their dead decompose before putting the bones in the barrow, or they went back in and moved them from one chamber to another after they'd been buried for a while. Either way, they seem to have purposely given them a good shuffle. Why?

To understand something of the Neolithic mentality you have to put aside the individualism which dominates modern thinking. People in the past were less focused on themselves as individuals and more conscious of the group or tribe of which they formed a part. Within this collective sense of self could be found a reverence for ancestors as part of the continuing collective whole. Again we have to detach our modern preconceptions which see ancestors in terms of specific lineage and genealogy – a line of individuals. To the barrow-people, ancestors were a much more nebulous and collective group representing "those who had gone before", in a more abstract and archetypal sense. The cycles of death and rebirth were all around them in the tides of nature and this cyclical pattern would have been obvious. Drawing upon the insights and blessings of those who were travelling the realms of the unseen would have been obvious too. And so it's not surprising that several barrows have presented evidence of regular and repeated entry and interaction with the bones of the ancestors over long periods of time, supporting the view that barrows were communal ritual sites and not just graves. 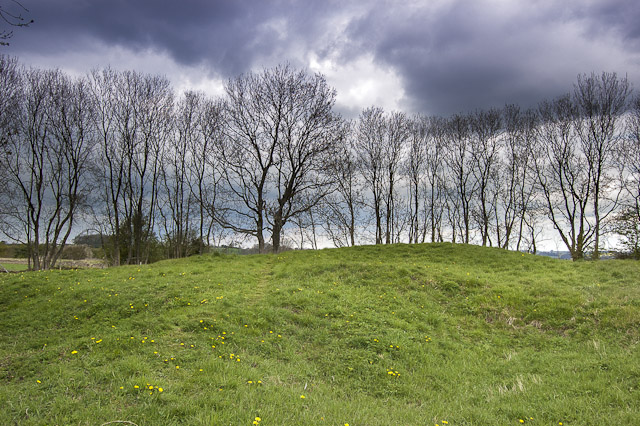 We can't know what rituals or practices the barrow-people followed. But we can see that it included a dynamic relationship with the ancestors, as the living entered the hollow dark spaces of the tomb and spread the bones from one space to another. Perhaps the multiple chambers represent different stages of the ancestors' journey through the afterlife, with the barrow itself a chamber of initiation for living and dead alike.

Notgrove long barrow was built with five internal chambers off a central passage, in common with many other barrows in what is called the Cotswold Severn group. It had a forecourt area at the eastern end and was structured all around with a double kerb of drystone walling. One thing that is quite unusual is that it was built on top of an earlier round barrow. In this instance there was a burial of a single individual: underneath the dome of the round barrow was the crouched skeleton of an old man. The body of a young girl had, at some later date, been placed on the top. The round barrow sits hidden in the centre of the long barrow immediately behind the furthest chamber. The passage and chambers of the long barrow contained disarticulated skeletons representing at least six people, with the jumbled bones of at least two more underneath the horned forecourt. It also had a possible standing stone on its north side. 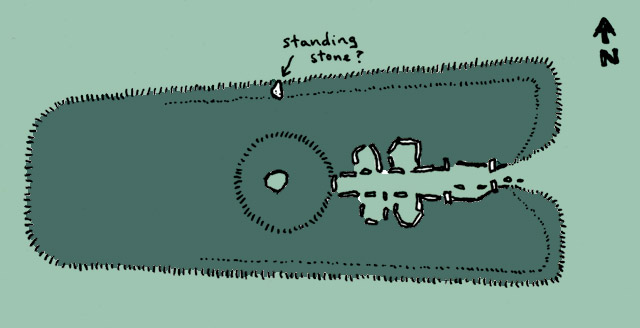 Plan of Notgrove long barrow – not that you can identify any of these features definitively from what now remains, sadly. Based on a plan in Timothy Darvill's book, itself based on the excavation map of 1934.

Far from yielding any golden coffins, the only treasures were a flint arrowhead and a black shale bead.

In the course of its first excavation in 1881, Notgrove barrow was ripped right open and its passage and chambers exposed to view. The 1934 excavation was also an exercise in regrettable unsubtlety. Photos of it in this exposed condition show it to be quite an impressive sight, but a rather melancholy inversion of what a barrow is supposed to be. Writing in 1931, H.W. Timperley laments that "the stones were meant to remain unseen – we have uncovered them and let the wind swirl in their empty spaces."

It was a fair point – with as much of problem for conservation as for the violation of ancient solitude. By the 1970s the condition of the stones was becoming a serious issue and the barrow was deteriorating rapidly, easy prey to vandalism and the wear and tear of visitors as well as the ravages of the weather. In an ideal world, the barrow would have been carefully reconstructed with its original materials, as was done at the magnificent Belas Knap barrow nearby. However, it being a non-ideal world, Gloucestershire County Council went for the more basic solution of dumping a load of soil over the stones to cover them. Thus we have ended up with the lumpy mangled bollocksation that so disappoints visitors today.

On the plus side, the barrow is managed as a miniature reserve for wild flowers. Limestone grassland in the Cotswolds is now rare and precious, as modern industrial farming has destroyed most of it. In the traditional way, the grass on the barrow is only mown once a year, in August. This means that for much of the summer it appears to be an overgrown mess of long grass, which understandably leads to an impression that it's being neglected. However, if you look more closely it's a beautiful tangle of blossoms: scabious, knapweed, harebells and yellow-wort – while in spring the whole mound is bursting with cowslips. 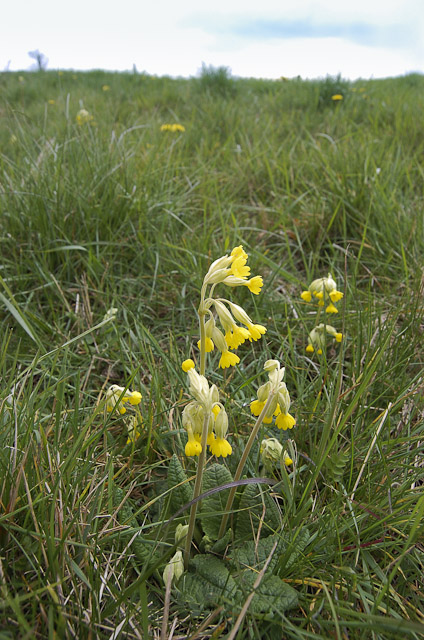 
"The tomb looks desolate in decay, yet it still holds something of the serene and simple impressiveness which must always have hung about it. There must be more than earth and stones in a form that, destroyed, can fill the mind with the peacefulness of the eternal and make it seem no greater and no less than the living quiescence which keeps the hills stable and puts the wind which sweeps over them into place as a ripple on the surface of time."

View Larger Map
Posted by Rebsie Fairholm at 1:03 AM