A trippy skip through the medieval English imagination, as expressed in carvings on old churches and elsewhere, taking in the fretfully bizarre and bordering on the loony. This is the first of an occasional series. 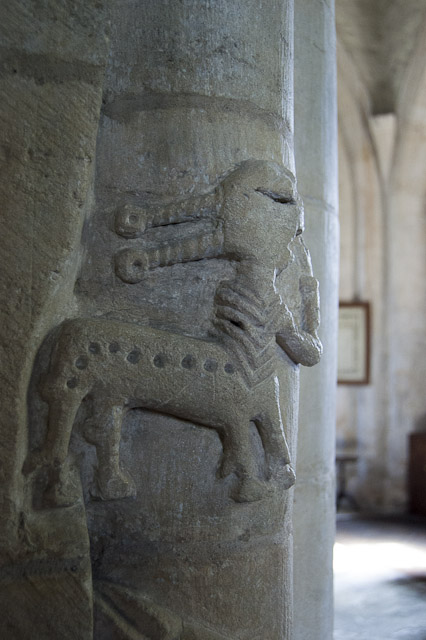 How I love this alien creature, committed to stone in the 12th century and still defying interpretation. In body it appears to be a centaur, with a sequence of deep-carved dots all down its side and onto its flank. But what the heck are those snail-like appendages at the back of its head? Antennae picking up the vibrations of the cosmos? Or just a very weird hairdo? It has an enormous, bulbous eye, carved in monstrous relief, its little mouth open in surprise. And it appears to be wearing a chevron T-shirt. What's also intriguing, but not visible in this shot because the carving goes round the pillar and it's not really possible to see the whole thing all at once, is that it bears a spear. Not that it's carrying one exactly, but there is a tall, pointed, upright spear levitating just beyond its outstretched hand.

This is just one of many 12th century carvings in Beckford parish church, and they show a wondrous diversity. I don't know whether it indicates that the Norman-era stonemasons had a sense of humour, or were consolidating now forgotten myths, folktales and visions, or whether there were a lot of groovy mushrooms growing in the vicinity at the time. Part of the bargain in enjoying this legacy of imagination is that we have to wonder, and not excessively analyse. 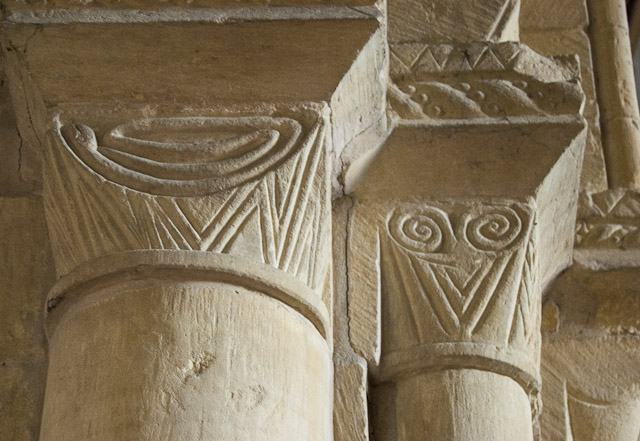 What's going on here then? This is the same chancel arch that hosts our little alien friend above, but on the opposite side. The pillars have these carved capitals bearing a chevron design – the Normans liked their chevrons – but while the capital on the right bears a spiral design with a certain Celtic/Saxon flavour, the larger one on the left has an upside-down and folded-up snake in it, bearing a rather miffed facial expression (as well he might). 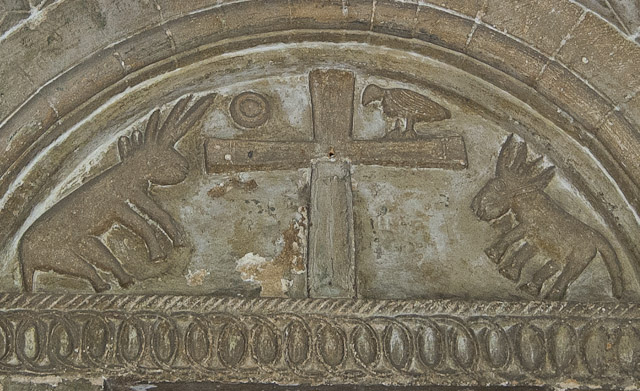 And here's the centrepiece of Beckford church – the tympanum above the main door, featuring a horned ass, a bird perched on a cross opposite a levitating disc, and a rather stiff-legged cow type thing with five horns. Well, why not? 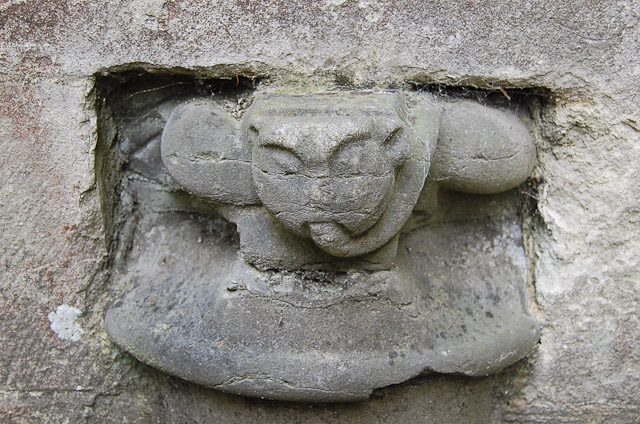 This is the carving I call the snorkelling imp, but God only knows what it is. Tewkesbury Abbey is famous for its carved roof bosses, but this is one of its lesser known carvings and is easily missed. It actually sits outdoors overlooking the site of a destroyed chapel on the north side. I don't think it belongs in its current position and has probably been stuffed into this niche for decoration. It has a flat top, and its fluted base looks like it may once have been the base of a pillar or something of that ilk. 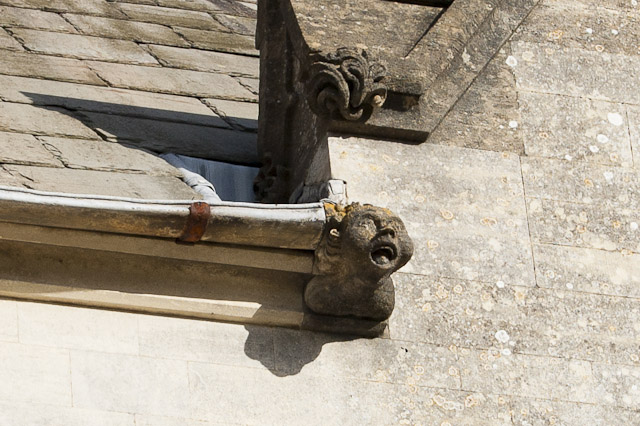 OK, so this screaming corbel isn't medieval or on a church, but it clearly echoes the style of medieval church carvings. It's perched high on the gables of Hawkwood College, a magnificent adult education establishment between Painswick and Stroud which started life as a Victorian-Gothic manor house and is an incredibly atmospheric place to spend a weekend. The house was built in the 1840s. 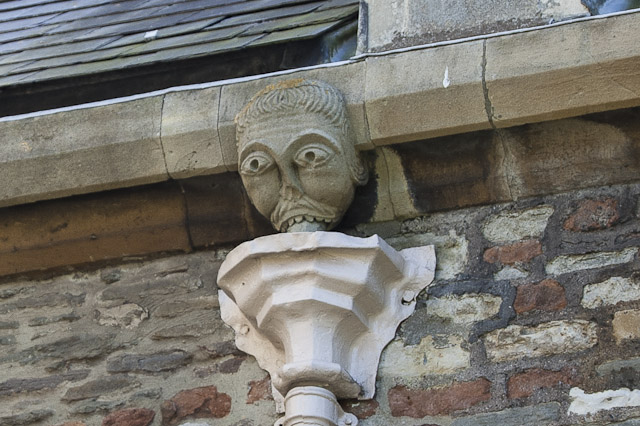 The church at Stanton Drew is quite an interesting place despite being eclipsed by its megalithic neighbours – it sits slap bang on an alignment between the Cove standing stones and the stone circles. Among its features are these lovely gargoyles. These examples look too fresh to be "originals" from the church's foundation, but they do echo the style of some very weathered medieval gargoyles on other parts of the church. 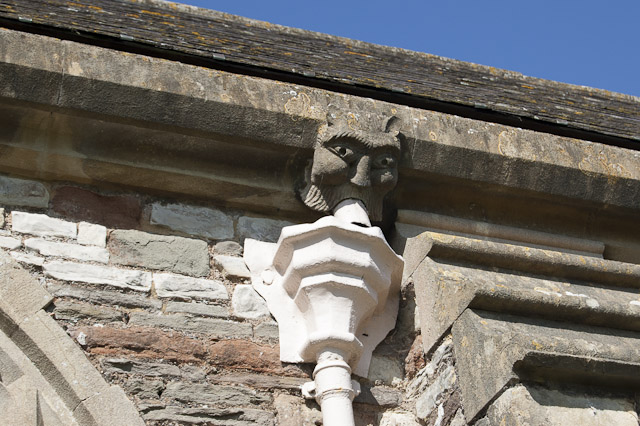 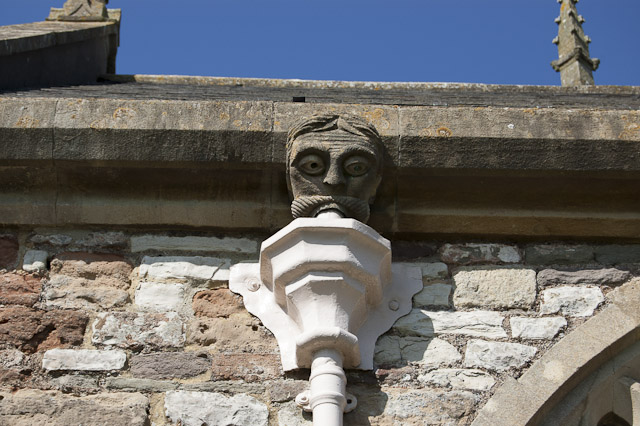 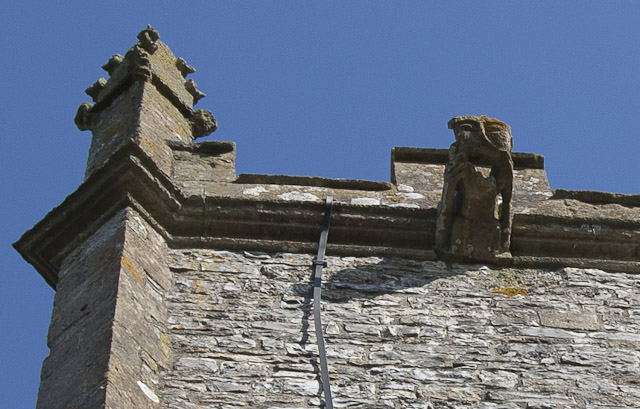 On the very top of the tower, this is one of the original medieval gargoyles at Stanton Drew. A very Celtic-looking stylised face with bulbous eyes, and with long hands holding its mouth open. 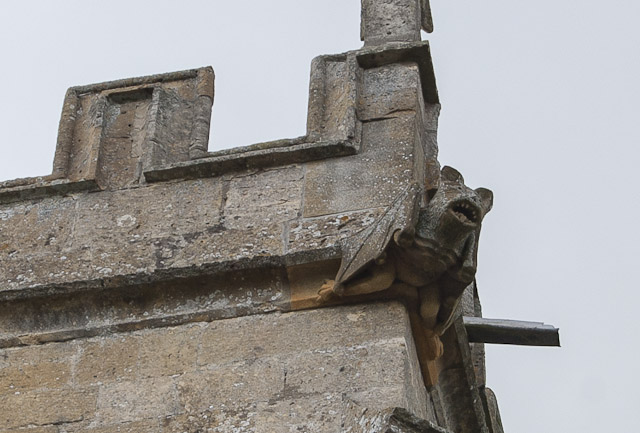 This final batch of weirdness can be found on St Faith's church in Overbury, a village on the slopes of Bredon Hill and just up the road from Beckford. This glorious old church is very well worth a visit, the inside being full of 12th century carvings. The tower is 15th century, and has four "guardians" at the corners, all different. Their position would suggest they were gargoyles but I see no evidence that they were ever designed to carry water, so I guess they're best described as corbels. Fairly standard monster here, a lion-footed bat with sharp teeth. 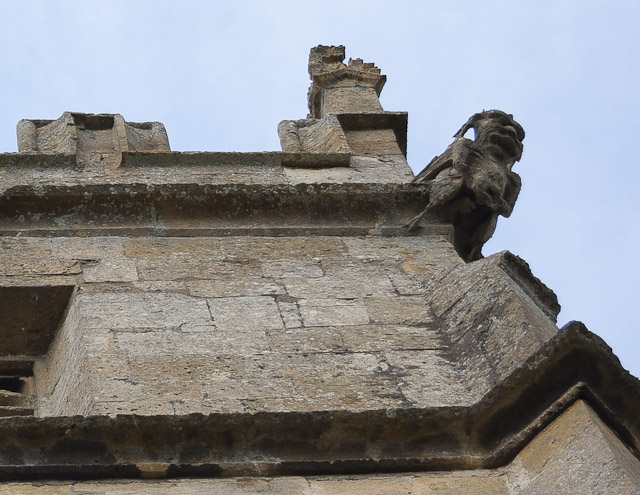 Another of the 15th century guardian corbels, this time in the form of a winged devil of very menacing aspect. It's a little hard to see in this photo, but he has a face in his belly, which is a motif you sometimes see in medieval images of the devil (unless that's somebody else's head he's holding). I like his little goose legs. 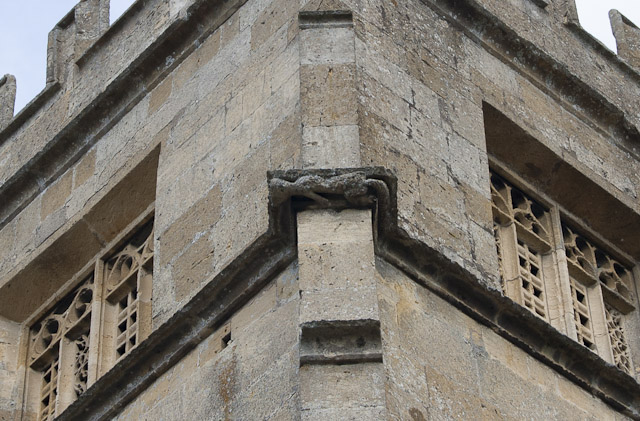 A little below one of the "guardians" on the tower is a cheeky little extra, a little fox-type creature hiding under a ledge on the corner buttress. It has a very long fox tail but it doesn't have a fox's face, unless it's very weathered, so perhaps it's another mythical beast. Or a ferret. 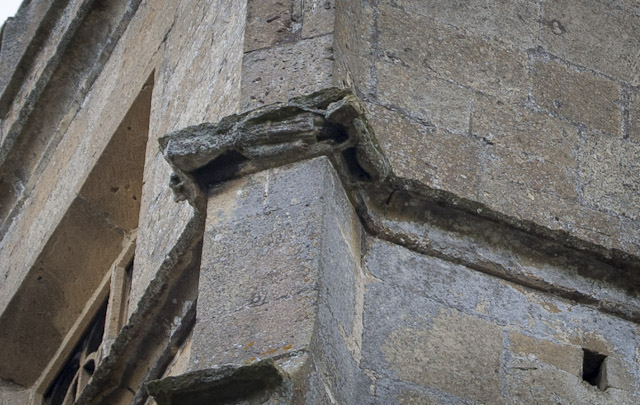 As for this one – again tucked away on a buttress on the 15th century tower – it's too weathered to see exactly what's going on. It appears to be a human figure with an animal crawling over them. Whether it's a dog on a lead, or whether the dog is eating the person, it's hard to tell. I thought at first the figure was a woman as it appears to be wearing a dress, but on second thoughts it looks like a peasant's smock, so probably a bloke. Maybe it's a shepherd and the animal is a sheep? Who knows. Just visible to the left of the person's head is another, smaller animal, which appears to be crawling over the person's hair/hat. All very intriguing.

Posted by Rebsie Fairholm at 4:04 PM