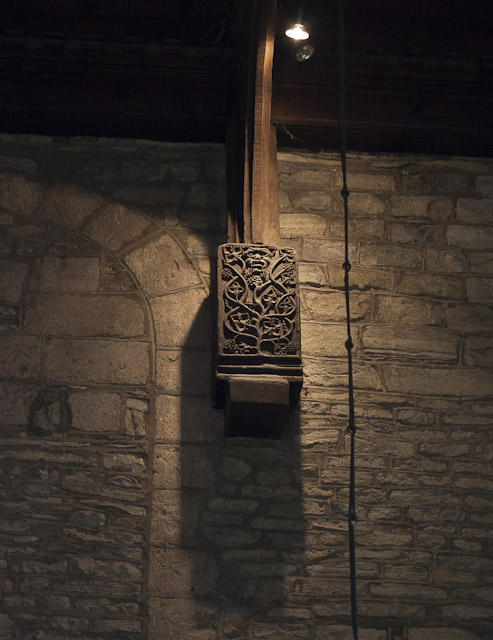 On May Hill, half way between Gloucester and Ross-on-Wye, a hungry faery took a chomp at a pear he found growing on a tree. The small, hard fruit was disgustingly bitter and he spat it out with such force that the pips flew out across the surrounding countryside, where they landed in the soil and grew into new trees.

That, if you want to believe local legend, is why Gloucestershire and its neighbouring counties of Herefordshire and Worcestershire are the heartland of perry pears, native semi-wild pears which are too hard and astringent for eating but can be milled and fermented into the most exquisite perry (or what is known commercially as pear cider). It explains in particular the other local saying that good perry pears can only be grown within sight of May Hill.

Exactly which varieties can be traced to the seeds the faery spat is a matter of conjecture, but one of the places a pip is supposed to have landed is Hartpury, a place where the tradition of perry-making goes back centuries. This Gloucestershire village even takes its name from the perry pear – "Hartpury" evolving from its early name of "Hardepirige" which translates as "hard pear". There is also a pear named after the village: the antique and venerable Hartpury Green. 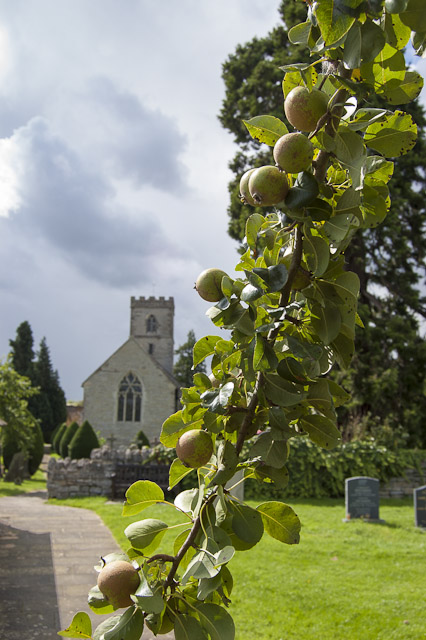 Writing his Vinetum Britannicum in 1691, John Worlidge notes that "Pears that are esteemed for their Vinous Juice in Worcestershire and those adjacent Parts, are the Red and Green Squash-pears, the John-pear, the Green Harpary, the Drake-pear, the Mary-pear, the Lullam-pear, but above all the rest are esteemed the Bosbury and the Bareland pears and the White and Red Horse pears." Of these, around half have since been lost – and of those that survive, some are designated "critically rare", including the Hartpury Green (Green Harpary). Fortunately Gloucestershire Orchard Group have been working hard to identify and propagate all the surviving local pear varieties to ensure they're conserved for the future; their website is full of fascinating information about local apples, pears, plums and nuts. And a number of perry pear trees have been planted in Hartpury churchyard. 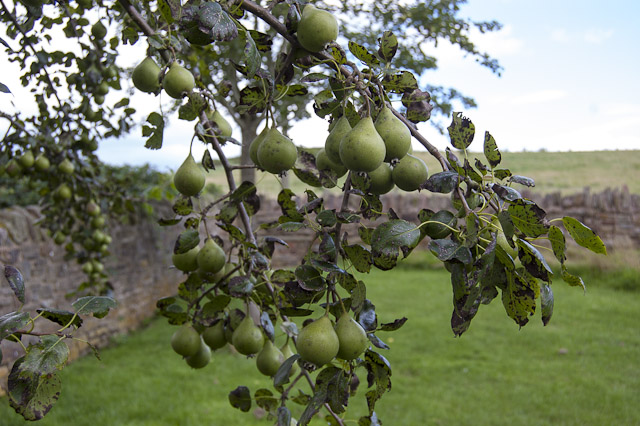 Perry pears are a bit smaller and a lot harder than dessert pears, and most of them are too bitter to eat raw (assuming you can get your teeth into them) as they contain a lot of tannin. They don't always look like pears either – you could be forgiven for mistaking the Hartpury Green for an apple, as it's round rather than pear-shaped. Traditionally, perry was home-made on farms and consumed locally. The process is similar to that of cider-making: the fresh pears are crushed in a mill and left to ferment using the naturally occurring yeasts already present in the pressed fruit. Good quality perry is still made in the area (and is quite distinct from commercial pear ciders which are generally made from concentrate). Among the varieties recorded in Gloucestershire, surviving or otherwise, can be found such delights as Ram's Cods (also known as Stitter Balls), Clipper Dick, Dead Boy, Jug Rumblers, Late Treacle, Sack, Piddle Pear, Bloody Bastard, Chaxhill Rough and Yellow Huffcap.

Not a bad legacy from the May Hill peary faery. 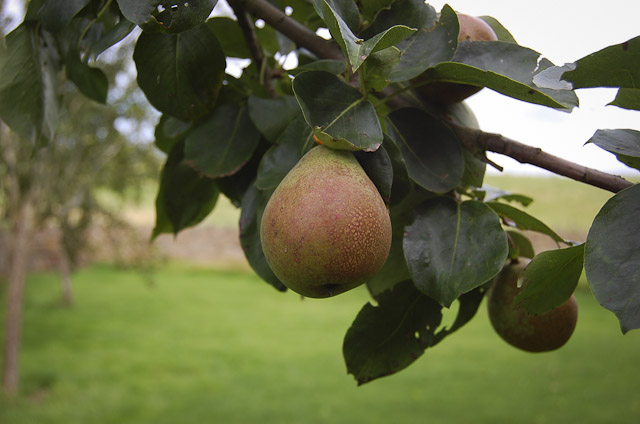 It has been speculated, though I'm not sure if there's anything more than speculation, that it's the pip-spitting fae of May Hill who is depicted in an intriguing carving in Hartpury parish church. This figure is one of two which perches high in the rafters, inserted into slots cut in the tie beam across the middle of the church. The figure is male and human-looking, but is covered with scales, which may be leaves or feathers – who knows. To some people it appears to be chainmail or fool's motley, though if you look closely the 'leaves' are distinctly separate and overlap one another. He has a Celtic-looking face with bulbous eyes and his hands are lightly pressed together over his midriff. There is a suggestion that this is our immortal friend clutching his aching tummy after feasting on the bitter pear! On the other hand, he may be a form of woodwose, or a jack-in-the-green. 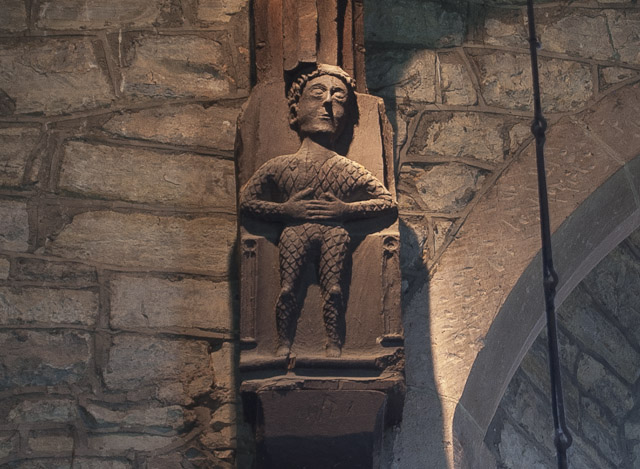 There's no denying the fruit theme though for the other figure on the opposite side. This one is a more straightforward green man. He looks a bit fierce in this picture but from other angles he appears to be laughing – a mood changing green man. He has leaf-shaped ears and his body is composed entirely of a grapevine, twirling abundantly with leaves and bunches of grapes. Grapevines may not be a common sight in the English climate, but as it happens there was a vineyard just a few yards away from the church during medieval times. The Abbot of Gloucester built his luxurious mansion house in the adjacent field, and grapes were among the many things the monks cultivated there. The green man is a symbol of abundance. 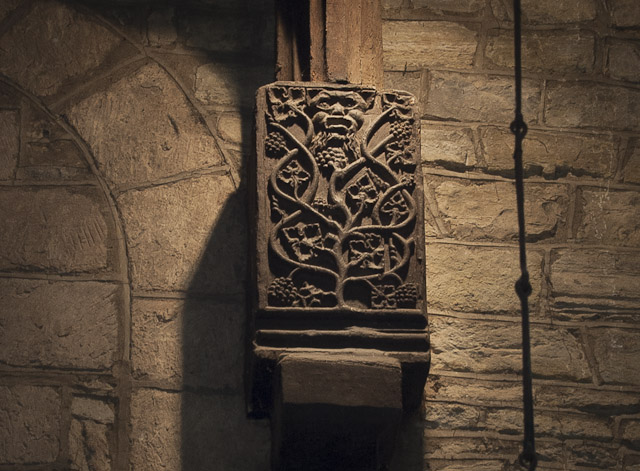 These two figures are something of a mystery, because they don't belong to the period of the church's original building, but have been put there at some later date. They are, however, very old – perhaps dating to the church's expansion in the 14th century. They're carved from oak and may have originated as bench ends or pew ends. But why they were set into the central beam of the roof – high up where it's difficult to see them – is anyone's guess. Perhaps, like gargoyles on towers, they have a protective role.

One possible explanation is that a fire took hold of the church at some time in its history. The evidence for this is the pink tint on the stonework in parts of the church. It's a characteristic of Cotswold stone that it indelibly turns pink when it's heated, which is a useful way of spotting the scenes of past fires in old churches (Tewkesbury Abbey has a pink line along the sanctuary wall where the monks set fire to a bookshelf). It's just possible that these two carved panels may have been salvaged after the fire and symbolically incorporated into their current display positions. 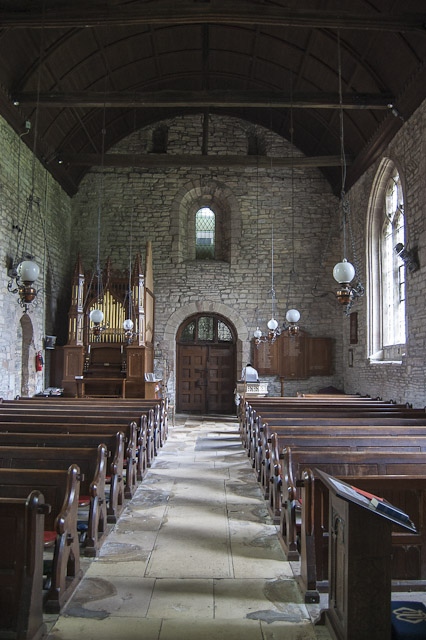 The church of St Mary the Virgin at Hartpury was built around 1100, or possibly earlier, and has some distinctive Saxon herringbone stonework in a few places in the walls. Whether that means it was built before 1066 or whether it's a case of the Saxon building styles lingering for a while after the Normans arrived, it's certainly a very antique place. The current chancel and tower were added in the 14th century but when you're inside the church there's no question about which part is the original, ancient bit. The atmosphere is incredible ... a tangle of tingles. The whole church has an extraordinary ambience but it's noticeably more intense within the nave.

The walls were originally plastered and painted with decorations (coats of arms are known to have been featured at Hartpury), but the dunderheaded Victorian twerps chipped it all off thinking they were "restoring" the church to some authentic bare-walled ideal. Some older features have stood the test of time though. A fear of witchcraft led to the practice of locking away holy water, usually within the font, as was done at Hartpury. The usefulness of holy water for magical practices made it a sought-after commodity for anointing places, charms and healing, DIY exorcisms, and the banishing of conjured spirits which got out of hand. 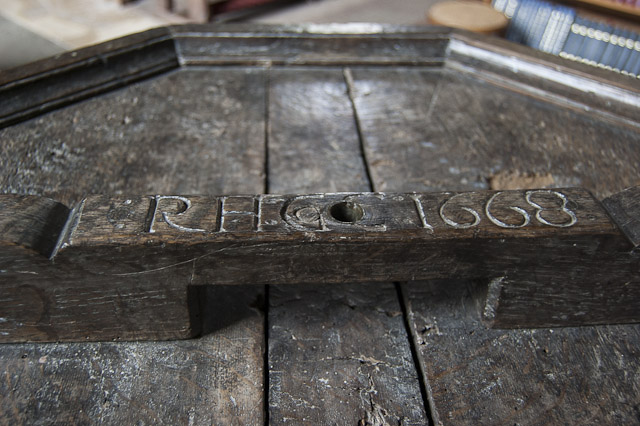 As in many churches, the font at Hartpury is fitted with a sturdy lockable lid to prevent holy water from being stolen and used for nefarious purposes. This 17th century lid is thought to be a replacement for the original.

It's sometimes questioned why such an obviously pagan figure as the green man should show up so often in churches. The reality is that this most pagan of symbols is entrenched in Christian tradition, and they aren't found in any pre-Christian context. The idea that it's either a symbol of the church's dominance over primitive nature spirits (if you're a Christian) or a cheeky re-emergence of the old gods asserting themselves against an oppressive new religion (if you're a pagan) tends to miss the point, I think. The green man is an archetype which just is. He doesn't need to be polarised by anyone's religious preferences, however firmly they may be held. He's as universal and irrepressible as the springing buds and swelling fruits in the land all around.

It also shouldn't be assumed that in times past everyone was simplistically pious and compliant. The parish church was the heart of a village community, with a social and protective role beyond its function for religious services, and everybody went there – yes, including witches! It takes all sorts to make up a community and some people are naturally non-theistic and don't feel or sense anything, while others are intuitively drawn to the natural magic inherent in the land and the seasons, and feel most spiritually alive when they're outdoors in wild places. This was surely as true in the past as it is today. Freed from the polarised viewpoints of our very modern prejudices, the green man is as much at home in a church as he is in a grove in the woods. 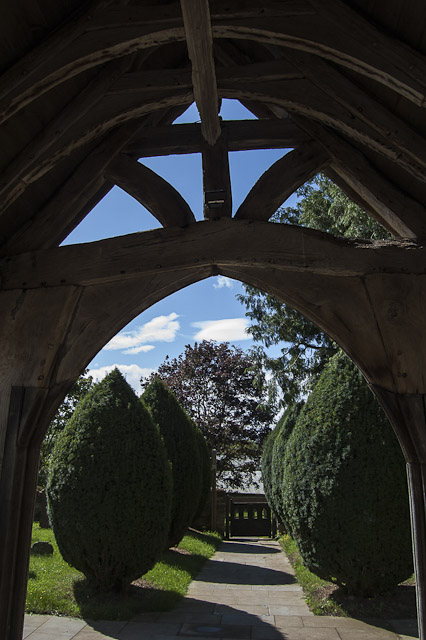 Hartpury church is in a quiet spot, some way out of the main village. The Abbot's big house was demolished in Victorian times, the only trace now being its moat undulating through the grass in the field beside the church. The present Hartpury Court is built from its stone. What does survive remarkably unspoiled though, as a reminder of the power and wealth of the medieval church, is the vast tithe barn on the other side of the road – another atmospheric delight of a place. It would have been used by Gloucester Abbey to stash the spoils of local taxation, which was paid to them in the form of agricultural produce. 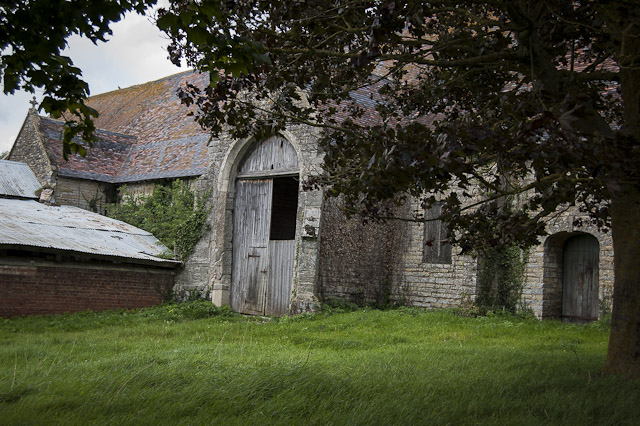 14th century tithe barn opposite Hartpury church. A legacy of the Abbot of Gloucester living here.

Psst ... if you're visiting Hartpury church, you may find the green man and his friend are not readily visible in normal daylight. On the organ case just inside the door is a row of light-switches, and the one on the far left puts a spotlight on the carved figures. Please remember to switch it off before you go and leave a little something in the collection box to thank them for their electricity.