Well in the Wildwood: the Mussel Well, Churchdown 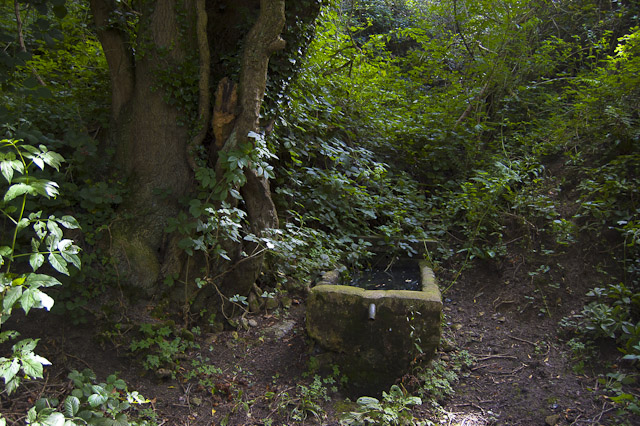 Churchdown Hill, locally called Chosen Hill, solitary bump in the vale, marshy under the weight of its springs. Only one spring is named. In fact it has three names. The Ordnance Survey map tantalisingly marks the Mussel Well in the woods on the NW slope on or near the ramparts of an Iron Age camp, but without making entirely clear exactly where it is. Older maps show it as the Muzzel Well, with similar lack of precision. Other local sources refer to it, rightly or wrongly, as the Roman Well.

Never mind the maps; how difficult can it be to find a well?

Er ... moderately, in my experience. One of the problems is that you don't know what you're looking for, unless you've seen a picture of it previously. A "well" might turn out to be anything from an elaborate system of stone-built channels and chambers to a simple puddle on the ground. If the Ordnance Survey marks it as a "well" rather than a "spring" then that usually means there's some kind of visible man-made structure in place. Usually, but not always. 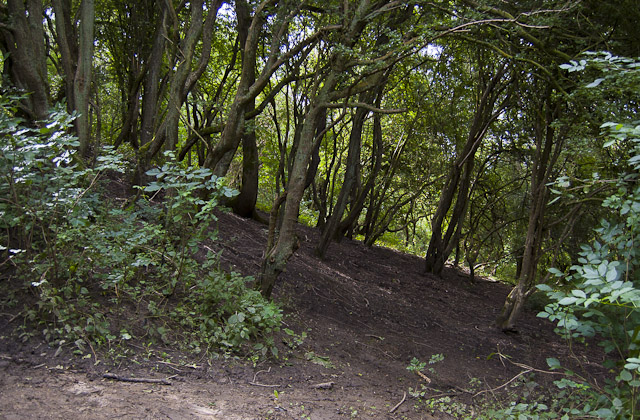 Well hidden: the slopes of Churchdown Hill are smothered with ancient woodland.

The first time I tried to discover the Mussel Well I didn't find it. Pitching into the faery-haunted woods below St Bartholomew's church, the magical church-on-a-tump which reminds me a little bit of Glastonbury Tor (only a bit flatter), I soon found myself hopelessly disorientated among the shady tangle of oak, ash and thorn. I squidged my way along endless stretches of boot sucking quagmire – abundant springs just under the surface ensure the paths remain perpetually muddy for most of the year – but realised I didn't have a clue where to look. I tried following my intuition, which led me towards a slight clearing in the trees on a steep slope (the whole hilltop is an Iron Age hillfort), but I was inadequately shod to make my way across an expanse of perilously sloping slop, studded with dog turds, to get to it, and so I reluctantly gave up. Not that I'm a cissy about falling on my arse in the mud, but I prefer not to do it with an expensive camera dangling round my neck. My frustration was increased when I got home and referred back to the maps because I realised that I'd been going the right way and must only have been a matter of yards away from finding it.

So I went back another day with a renewed resolve and a robust pair of boots. This time I got through the mud obstacles with ease, sending iridescent flies spinning from chunks of canine crap in the sunlight, but still no well. I trekked down the path one way, then trekked back up it the other way, all to no avail, and thought I was going to have to give up again. And then a distinctly smug voice in my head said "it's not so hard to find, you know." Meaning that oh yes it is hard to find, but my inner senses could lead me to it if only I'd let them. A moment later I noticed a narrow, informal path running up the rampart slope between the trees, and up it I went. Still no sign of a well, but half way up the earthworks my eye was drawn to a very imposing tree. An old hollow ash with whirls of ivy draped over it and a tall, triangular opening at the base. 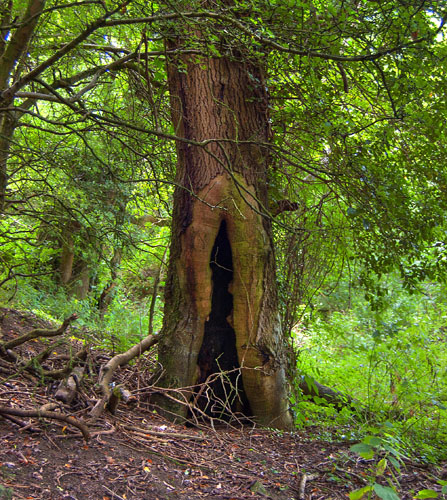 Now, holey trees like this are a magnetic draw to my pagan soul, so I went over to get a closer look at it. There was something so powerful about its aura though that I was afraid to go too close; this was a tree Not-To-Be-Messed-With. I've rarely seen ash trees as big and old as this, and it appeared to be part of a row of mature ashes standing in a line; even within the wood with other trees all around, they stood out as venerable sentinels. And when I looked at the next one along, another tangle of ancient boughs, I saw that snuggled under its roots was a stone trough. Aha! 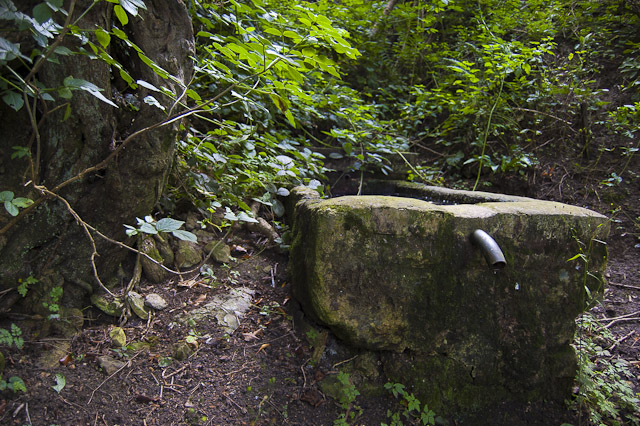 The Mussel Well – and I assume this is the Mussel Well, although there's no sign to say so – is an unprepossessing rectangular trough of indeterminate age, repaired or rebuilt multiple times by the look of it, obscured by dirt and moss and encroached by brambles. The water emerges from a metal pipe in a concrete block embedded into the hillside and falls into the trough, which is only a few inches deep and partially filled with well-rotted crud. The water then flows out through a second pipe at the front end. But maybe flows isn't the right word, because it's really somewhere between a trickle and a drip. So slight, in fact, that there's no drainage as such. The water drips into what appears to be a fairly primitive soakaway and barely even wets the ground. Intriguingly though, the ground below the well has a gulley cut through it as if there were formerly a stream running down the slope, although it's now dry and filled with brambles. There are also a few bits of stone lying about, half buried, which may have been part of it at some point. 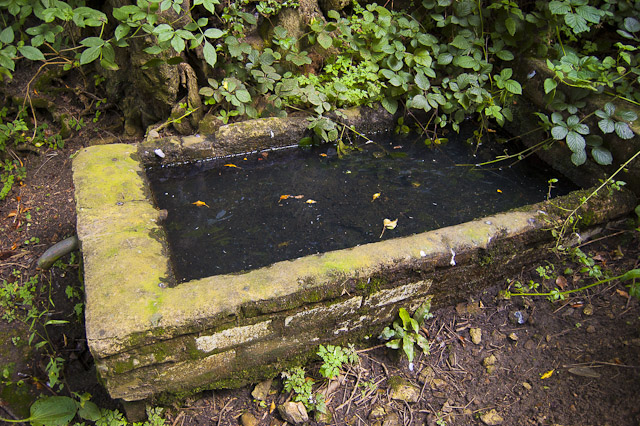 Because of the slowness of the flow, the water in the trough is stagnant. I have a little self-anointing ritual I normally do when I encounter a well or spring, but the deep green depths of this pool revealed unappetising corpses of flies and worms and a host of unsavoury insect larva thingies wiggling about in it under a filmy sheen of gluck on the surface, and I really didn't feel inclined to dip my fingers in it. So I compromised by dipping my fingers in the drip of water coming out of the pipe, which was of course just as dirty and disgusting as the trough, but didn't look as horrible.

I'm not painting a very romantic view of this site am I? I have to say though, despite the state of the physical attributes, this felt like a spot with a bit of sacred whoomph behind it. Much of this was coming from the great gnarled and twisted ivy-mantled ash tree which stands guard beside it, a tree with a very active faery presence which takes its guardianship role very seriously, thank you very much. It's no good telling the tree spirit that the well is dirty and polluted; it presides over an older and deeper presence which goes beyond physical conditions. 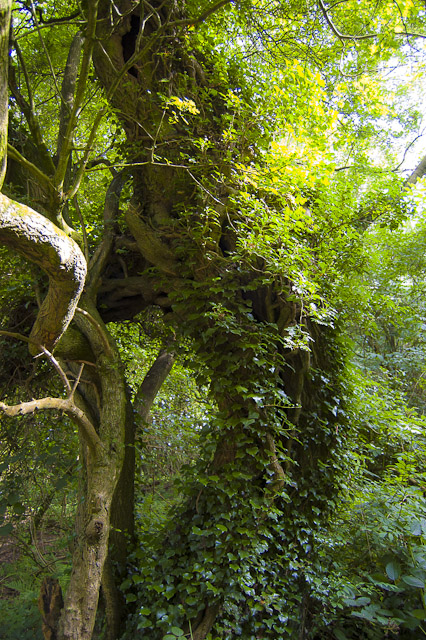 The guardian of the well

Aside from the ambiance of the place, what can I tell you about the well? Available information is negligible. Most guides to Churchdown Hill make mention of the Mussel Well (frequently misspelt "Mussell") but none seem to offer any enlightenment. The local authority tourist information singles it out as one of the significant historical sites on the hill, and then says simply: "its history is obscure." Right, OK then. There doesn't seem to be any clue as to why it's called the Mussel Well, which I assume doesn't have anything to do with molluscs because the name appears to have evolved from an earlier form spelled "Muzzel". And there aren't any molluscs around here anyway, except fossilised ones. Perhaps the answer lies in an obscure land deed or reference library somewhere.

The Woodland Trust, who own and manage the woods, don't have a lot of historical information either, but they do mention in their leaflet that the Mussel Well provides a water supply to nearby Green Farm via a hidden pipe. If that's the case, then it explains why the current flow of the well is so depleted, and why it has the appearance of having been more gushing in the past. It's hard to guess at the age of the trough, as it looks to have been patched up several times; it has some white ceramic-lined bricks which look to be about a century old, and the lower stonework appears older. The alternative name, the Roman Well, implies that the site, if not the trough, dates back to Roman times – but such names can be misleading. There's no doubt that Churchdown Hill was a site of interest and activity for the Romans, and there's a set of steps credited to them on a nearby slope. But the bank in which the well is set is part of the Iron Age earthwork, long predating the Roman occupation. The well must surely have been known by the Dobunni people who lived here in pre-Christian times, although whether it was simply a water supply or had a religious significance I don't know (though I know what my intuition tells me). 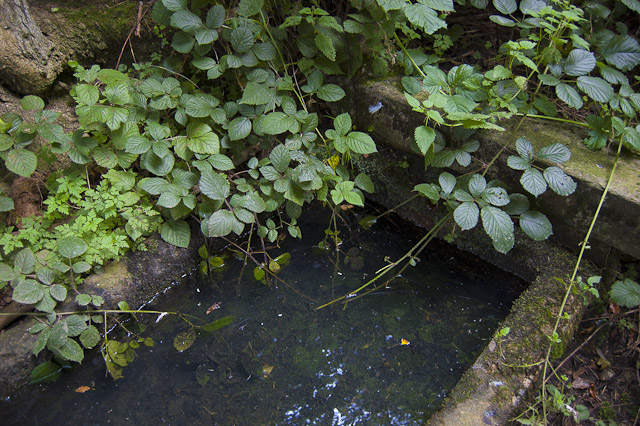 One of the only references I've found in any of my books is in Stephen Yeates' A Dreaming for the Witches (which, interestingly enough, has an aerial photo of Churchdown Hill on the cover). He cites an earlier history of Churchdown by W.T. Swift, published 1905, which reports sightings of a faery funeral procession coming through the entrance of the Iron Age ramparts and disappearing into the hillside at an ash tree by the Mussel Well. There are of course many folk traditions about faeries seen or encountered at a well in the woods: the Mabinogion, the legend of the Faery Melusine, the folk song Tam Lin, and many medieval literary sources. As bonkers as these things may seem to modern readers, I have to say that having felt the aura of awe around that opening in the ash tree, not to mention the intensely solicitous green guardian of the ash tree beside the well, the idea of this place being a long established portal into faery doesn't seem very surprising to me! 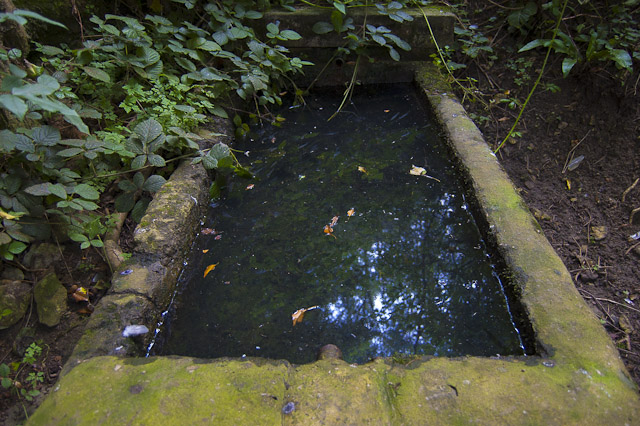 Posted by Rebsie Fairholm at 1:18 AM